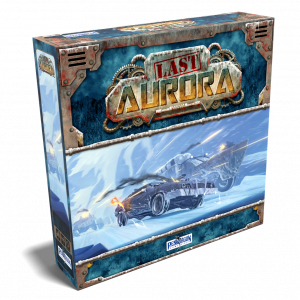 The radioactive dust of the Last War has frozen the northern countries. In the ice desert, the few survivors live a nice hell: the resources of the “old world” are now exhausted, and traveling to the south is too long and dangerous. A radio message though is rekindling hope: the last icebreaker ship, the Aurora, is cruising along the coast, looking for survivors.  In a few days, those who cannot get on board will be doomed by the ice. It will be a race against the time, to arrive at the ship or surrender to despair: there’s still the light of hope on the horizon, a light to grab before it’s too late.
Last Aurora is a post apocalyptic game for 2-4 players set in a frozen desolate land. Each player has to manage his crew to gather resources, recruit survivors, improve his vehicle and fight enemies, racing to reach the ship before it’s too late.

The game is structured to be played in 6 rounds, divided into 5 phases. Every player has a board to manage his convoy and resources. The Truck Zone is a zone where the player will combine his truck, devices, and trails. The Active Zone is where the survivors will be available to take actions.  The Exhausted and Rest Zone is for the survivors to recover from their efforts.

-The Exploration Phase will let you enter the locations around you to perform different actions. According to the value of the survivor sent,  you will be able to:

– During the Rest Phase you will choose between sending the exhausted survivors to sleep for 1 round or immediately recover them by spending food.

– In the Movement Phase you spend fuel to move according to your current truck configuration; adding bonuses, actions, and special objects to accelerate. You will have to choose the best road to avoid contaminated locations.

– You will face many powerful enemies during the game who will attack and damage your convoy. In the Fire Weapons Phase you will fight these dangerous enemies using your ammunition to activate your specialized weapons,  which will improve your fame and yield Loot Cards!

– In the last phase of the round, the Aurora will move along the coast. If you can reach it you will gain reputation according to the number of survivors you save. If not, dangerous travel awaits you toward the south and your convoy strength will be more valuable. 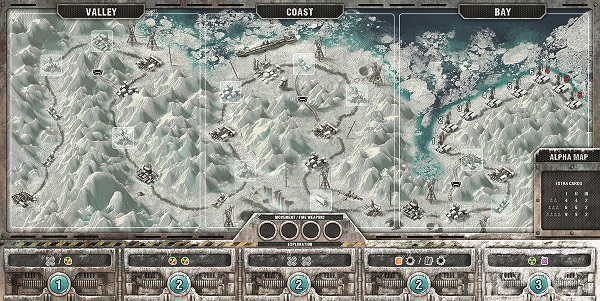 Designer Diary – The birth of the game 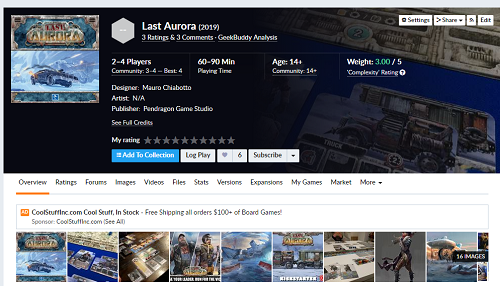